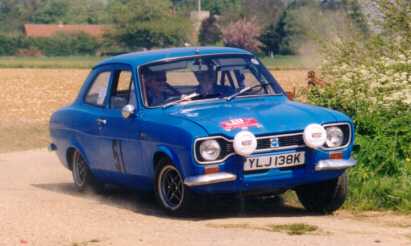 The RaySport.com East Anglian Classic Rally was won by the Chelmsford Motor Club crew of John Parsons and Gavin Rogers in an Escort Mexico. In keeping with the period of the car, it was John's first win since 1972. Just behind were Ian Phillips and Jim Bowie in a Vauxhall Firenza. Third and first championship contenders were Dick Appleton and Andy Gibson in their Cooper S, who were vying for the lead until their Mini went onto two cylinders on the penultimate night section.

The event was held in glorious sunshine in the Norfolk countryside. Early leaders were the local Escort crew of Lee Earthy and Peter Riddle. However a broken exhaust and subsequently a missed control on the night section put them out of the top ten. Chris Hunt-Cooke and Richard Dix in an MGB were another crew to be caught out by the night route navigation missing a passage check, they eventually finished 8th. Jim Deacon and Dave Wilson were going well on the tests until their Lotus Cortina engine cried enough. Geoff Twigg and Graham Carter in their Cooper S, were the best on the regularities, dropping a mere 34 seconds but a navigational error on the night route pushed them back to 5th, losing the tie break to Tim Grant and Mark Goodman in a Cortina. Husband and wife team Paul and Pat Robinson followed in 6th place in another mini.

The enthusiastically driven Austin A35 of Laurence Burrage and Brian Mead picked up both the Concours D'Elegance and class A trophies.

Spirit of the rally award went to Barbara Morris and Sylvia McCrae, who, when the road was blocked by stray cows, holding up the later competitors, managed to herd the cattle back into their field, and continue.