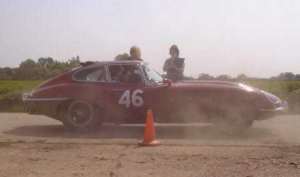 Some feedback from competitors:

Paul Hernaman / Ray Crowther (Porsche 911)
“What a brilliant event. If only the driver listened to the navigator more we might even have won! We were very impressed how much thought had gone into how to set up the average speeds for the regularities vs what the navigation and roads were doing and similarly the roads on the night section matching the navigation handouts to give the navigators a chance. Getting a section of 55 miles and then another of 35 was excellent and allowed us to really get into the swing of things and with all the TCs manned to boot. Seeing locals sitting out in their deckchairs urging us to go faster was great.”

David Hughes / Richard Dix (Volvo Amazon 121)
“The rally was excellent in every respect, and I personally felt that the night section was particularly challenging and enjoyable. We will be back next year.”