The rally was the third round of the 1999 HRCR Historic Road Rally Championship.

Sponsored by the motor-sport division of RN Electronics and established as the only Historic Road Rally in the East of England, the EAST ANGLIAN CLASSIC is modelled on the old BRITVIC RALLY and uses a popular two day format which gives a demanding competitive element with plenty of time for socialising and relaxing between the legs. 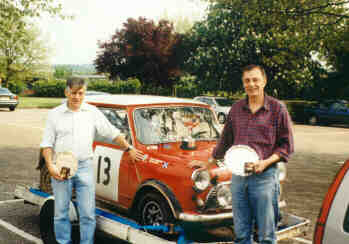 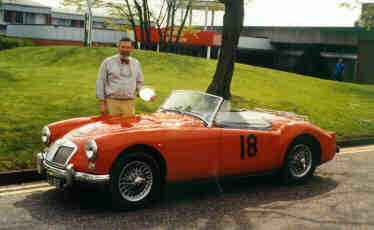 The three hundred mile two day event based around the Posthouse hotel in southern Norwich attracted a record forty nine entries and re-enforced its status as one of the country's top historic road rallies. All bar one of the previous winners were competing (1997 winning navigator John Thornley came out to marshal this year) and the rally also attracted nine CMC members, of whom more later.

A pre-event billing in the Motoring News declared the East Anglian Classic to be 'The friendly rally' and sponsors Raysport, the motorsport division of Roger and Sue Ray's RN Electronics business, ensured that this reputation was upheld by hosting a drinks party the night before the rally started.

A civilised 10.45am start from Norwich was followed by a gentle run along the A47 to the first tests at Wendling and Fransham. Nick Colman and Jim Bowie were first into the fray here - by going off at the first corner of the first test and damaging their Sunbeam Alpine's front offside wing, this was an inauspicious start for the Ecurie Canary team members. At the end of the test their fuel pump failed and was mended by Roger Ray who kindly stopped for twenty minutes to assist.

One other significant event on these first tests was the demise of Peter Horsburgh's speedo drive. This forced the Cooper S crew to do the regularity sections with no trip or odometer. Being sandwiched on the road a minute either side of fellow Small is Beautiful team members Geoff Twigg / Graham Carter and Dick Appleton / Andy Gibson gave them some security but Alistair had to use all his ingenuity and skill to only accrue ninety seven seconds' penalty across eleven competitive controls during the day.

The highlight of the morning's competition was six driving tests at RAF West Raynam, the use of which had been secured for the first time thanks to day route co-ordinator Mark Andrews's persistence with his contacts at the MOD. Three tests were laid out by Tony Clements, using a combination of airfield 'furniture' and cones were each done twice. Despite protestations (from slower drivers) to the contrary, the nature of the tests (which were fairly fast and flowing) did not suit the Minis, it just happened that the Minis were generally quicker!

Petrol at Fakenham was followed by a regularity which took the route northwards to the coast and onwards to a driving test at Langham airfield (run by the event's assistant chief marshal Richard Turnbull).

Two more regularity sections wended their way through the pleasant, and thankfully dry, Norfolk lanes towards the finale of the day route - the Royal Norfolk Showground. Best performance on the regularities went to the Ford Cortina of eventual third place crew Paul Cornwell and Michael Valentine - a total of twenty one seconds' penalty, fourteen seconds ahead of Jim Deacon and Dave Wilson, also in a Cortina. Of the Essex Escorts, Roger and Paul Ray put in a good performance, seventh best with fifty six seconds; John Parsons and Gavin Rogers slipped down the pecking order to seventeenth best owing to a few miscalculations whilst first timers Jim Ryan and Gavin Leech were struggling in thirty second place.

The showground was a good place to forget about the rigours of the regularities. Two tests on slippery tarmac and even more slippery gravel were each run twice. From these the Mini crew of Geoff Twigg and Graham Carter emerged with an overall lead, closely followed by Dick Appleton and Andy Gibson. The Rays were the best CMC crew in seventh, with John and Gavin looking forward to the night route in eleventh. Kelvin Edgar and Peter Morgan retired their Mini at this point quoting Led Zepplin's 'Communication Breakdown'.

Night route co-ordinator Richard MacLachlan put together an all new hundred mile plot and bash road rally which featured last year's most popular innovation, a 'selective' at Brandiston airfield, as well as a few smooth whites and Bilney Ford. The straightforward navigation and longish sections were intended to leave ten crews clean into Brandiston, although only seven (including Parsons / Rogers) actually were. Notable CMC crews who failed to cut the mustard during the night were Colman / Bowie (fifteen minutes) and the Rays (two minutes).

Jim Ryan and Gavin Leech were among several crews who investigated a white which wasn't part of the route and which didn't 'go'. Worst off here was last year's winner Adam Wiseburg who got his Porsche 911 stuck and went OTL before being towed out by Sue Ray and family who were marshalling.

A six minute wrong slot by Graham Carter cost him overall victory when he failed to plot a sequence of junctions correctly. One crew came out of the night route with more than they bargained for; Michael Valentine spotted a parked car next to a code board and decided that its occupants (who were smoking something which wasn't tobacco) were marshals. Although they denied any knowledge of the rally and didn't have a pen, they were still persuaded to sign Michael's time card. To this signature he added an essay about uncooperative marshals and was awarded the spirit of the rally award for his persistence.

When the weary crews staggered into the hotel bar between two and three am it was found to be Peter Horsburgh was fastest round Brandiston and overall leader. (Organiser's note - an explanation of how Brandiston 'suited the Minis' is eagerly awaited.) Many people who staggered out of the bar some hours later were even wearier the next day, notably Paul Ray and Richard MacLachlan.

An early breakfast preceded a 10am start and a journey to the Lotus test track at Hethel. Peter Riddle and the boys from SCCON laid out a test which was shorter than previous years' tests but which was generally reckoned to be better and more demanding on driver skill. Two runs of this test were to prove too much for fourth overall placed Imp crew David Raynor and Phil Smith who retired within sight of the finish with a broken drive shaft.

Richard Turnbull popped up again to organise the penultimate test of the day at Old Buckenham - a short blast along a narrow and fairly slippery airfield track with a few slaloms in and out of cones. This was followed by a run up the A11 back to Norwich for the popular finale of the event, the Mad Cow autotest in the cattle market car park opposite the hotel.

The results service and time card collection point were placed in the cattle market which enabled all the competitors to spectate / hurl abuse at / applaud as their rivals attempted a very public demonstration of skill / humiliation. Top entertainment was provided by Jim Deacon who had broken reverse gear on his Lotus Cortina and lined up ten of his friends to push him around the reversing part of the test - setting a remarkably good time in the process.

Tony Michael's superb results service speedily calculated the final placings whilst everyone else sat down to a buffet lunch. Of the CMC runners and riders John Parsons and Gavin Rogers were highest placed with an excellent fourth overall and first Post Historic, Roger and Paul Ray weren't far off the pace in sixth, second in class. There was then a fair gap to Nick Colman / Jim Bowie in twentieth place, one in front of Ray Heathcote / Pat Gadsby and finally Jim Ryan / Gavin Leech at thirty first overall.

New CMC member Val Williams deserves commendation for getting her MGA to the finish, albeit in last place, despite not being the most competitive crew she and Anne Dykes enjoyed themselves all weekend. Another MGA of note was Keith Colman's, which was voted Concours winner by Sue Ray. Keith and navigator Damian Conway were properly dressed in cravats and bow ties on the Sunday leg.

As Clerk of the Course I would like to thank all the marshals who came out over the weekend and the team organising who made it all happen:-

Jacqui Leech who was a super efficient secretary and did most jobs before rather than after I'd asked for them.

Brian Jaggs in his second year as chief marshal once again assisted by Richard Turnbull. Between them they got ever control covered and arranged numerous marshals for the test venues.

Mark Andrews - Day Route Co-ordinator, at his most 'sorted' ever.

Tony Michael and Darren Jefford - Results, the hardest job over the weekend with the least sleep. Tony's programme gets better every year.

John Blackwell and Dean Buckley who lugged the Budget equipment van round Norfolk all weekend and marshalled as well.

Paul Barrett, Clerk of the Course

The Spirit of Persistence.

"Great fun that, but I'm not sure about your passage check marshal; seemed a bit gormless to me!" proclaims Michael Valentine, entering the increasingly busier bar of the Post House Norwich at 2 am.

"Funny I didn't think we had any manned passage controls"

"Yeah, the guy didn't have a clue, he insisted on signing the bottom of the card"

Michael shows me the card, signed sure enough with a squiggle at the bottom and Michael's largearrow indicating the box he thought it should go in. A quick inspection of the growing pile of cards on the table in front of me revealed no such heiroglyphs on any other.

Mildly pissed by this time, I enquire "You're sure you didn't just accost some punter who was lurking near a codeboard"

Michael looks puzzled, "I had to ask him a number of times, he seemed really confused. In the end he said OK".

A hawk eared bystander comments that a Gold BMW was spotted parked by a codeboard out there. There is some conjecture as to the particular substance they were smoking.

Michael's eyes widen, "That would explain why I had to lend him my pen."

We had to give him the Spirit of the Rally Award for that.